Who Cares About the Cost of Driving?

Summer Travelers Are At the Top of the List

I have to admit that when we launched our trip planning application Cost2Drive back in October of 2008 we weren’t sure of the answer to this question.  Gas prices had just come off the record highs of  the previous summer and were beginning their precipitous fall to levels we hadn’t seen in 10 years.

Fast-forward to today and, in large part due to once-again soaring gas prices combined with a struggling economy, the cost of driving seems to be on everyone’s mind.

As a result we’re continuing to see the surge in traffic to Cost2Drive that began earlier in the year as over 40,000 people visited the site in June to plan upcoming road trips.  This represented 20% growth over May and was more than double the number of visitors from June of last year.

So where are all these people going?  When we look at the destinations people are entering on Cost2Drive the top two destinations are consistently Orlando, FL and Las Vegas, NV.

Anyone that’s worked in the travel industry (I previously ran AOL Travel) knows that year-in and year-out these are the two most popular leisure vacation destinations in the US, indicating that we’re attracting a leisure travel audience to the site.  So far this year over 15,000 routes have been entered on Cost2Drive.com with Orlando as the destination, and another 5,000 with Walt Disney World or Disneyland meaning that as many as 20,000 travelers have used Cost2Drive to help plan a Disney vacation.

Other popular searches on Cost2Drive so far this summer include National Parks (as we pointed out in a previous post).  We’re seeing a surge in interest from summer travelers who want to find how much it will cost them to drive to the Grand Canyon or Yellowstone or Yosemite National Parks based on current gas prices.

Another indication that leisure travelers are finding their way to Cost2Drive is the recent spike in searches on beach destinations like Duck, Corolla and Nags Head in the Outer Banks of North Carolina, Myrtle Beach in South Carolina and the beaches of Cape Cod in Massachusetts.  These are all popular drive-to  destinations so its not surprising our trip planning application comes in handy.

And last – but definitely not least – are hotels.  Users are starting to figure out that with the new autocomplete functionality we added to Cost2Drive last month they can simply start typing in a hotel name and, if the hotel is in the database, a few keystrokes is all it takes to locate and enter an address.  As a result we’ve seen hundreds of searches on hotel names in the past month. 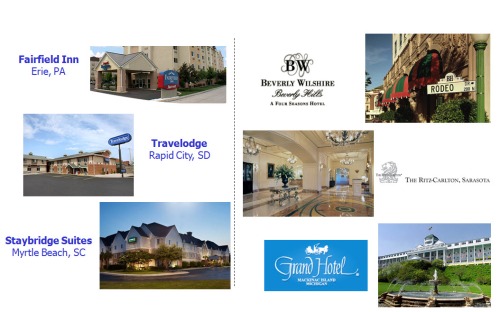 So what types of hotels are Cost2Drive users staying in?  A common misconception about the car traveler market is that it is purely budget focused, and although we certainly see a cluster of searches on hotels in the moderate price range like Travelodge, Fairfield Inn and Staybridge Suites, we also see plenty of searches on full service hotels like Marriott, Sheraton and Hilton and even some in the luxury segment like the Beverly Hills Wilshire, Ritz Carlton and the Grand Hotel on Mackinac Island, MI.

So don’t assume that ‘drive equals cheap”.  After all, as anyone that’s driven a family of four to Disney World can attest, its far from inexpensive…but the memories are priceless.