Earlier this year a new movie version of the famous Ayn Rand novel Atlas Shrugged was released that depicted the US economy in a disastrous state by 2016 with gas prices at $34 per gallon.  This no doubt unsettled the car owners in the audience who were already being pummeled by soaring gas prices for the second time in 3 years, and as unlikely as the above  nightmarish scenario is, there’s no question that the persistence of +$3 gas prices is taking a serious toll on the constitution of consumers.

This became more evident last week with the release of a research report from the New America Foundation titled The Price-Induced Energy Trap.  The report argues that consumers are in an “energy trap” because their ability to effectively respond to rising gas prices is limited and highly dependent on income levels, with the middle and lower income groups suffering the most.  As a result, many of the desired outcomes of a policy-by-price approach (such as increased purchases of hybrids and other fuel efficient vehicles) are never realized because the neediest people cannot afford them, creating a paradox that defies traditional supply and demand elasticity curves. 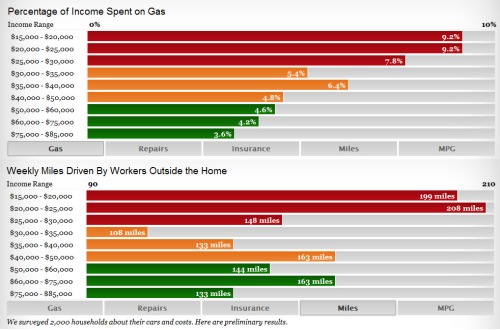 Putting mind-numbing economics lingo aside, the real story here is that as  temperatures have fallen across much of the nation gas prices have not, at least not to the levels we’ve come to expect with autumn setting in.  In fact, as reported by AAA and later picked up by the LA Times, gas prices are at historic highs for this time of year and 22.6% higher than the previous record.

In fact gas prices are rising much faster than incomes, so its hard not to feel a little queasy these days when glancing at the gas gauge and seeing it drop below a quarter tank.  This likely explains why earlier this year AAA reported an upsurge in the number of stranded drivers due to vehicles that had run out of gas.  Apparently many people were stretching out the intervals between refueling in the delusional hope gas prices would decline, a somewhat disturbing change in behavior that reflects the impact high gas prices have on people.

I’ll relate another rather disturbing episode I encountered this past spring on a trip from New York to DC.  It was late at night, well after midnight, and I had stopped at a rest stop in Maryland to grab some coffee to keep me awake for the remainder of my journey (thank goodness Starbucks was open).  As I left my vehicle I heard a woman’s voice call out to me, something about gas and getting home.  I warily looked over and saw a woman of middle age waving me over from the front seat of what looked to be a 20-year-old Jeep Cherokee.

As I approached her she started waiving her wallet out the window.  Did she want to show me her ID?  Then I realized she was showing me her wallet was empty, and she explained that she needed money to buy enough gas to take her the 32 miles to her home.  I handed the woman a few dollars, and then after thinking about it handed her a few more (unfortunately our Cost2drive iPhone app hadn’t launched yet or I could have given her the exact amount).

Something about the whole scene was upsetting. The woman didn’t look indigent, she could have been my mother and I doubt that she’s accustomed to begging for money.  It made me recall some of the scenes from Atlas Shrugged, and as I got back in my car to head back to DC I started to feel a little nauseous.

When you envision a product you often have an existing product in mind where you see opportunity to improve or enhance it in a way that will better serve the marketplace.  Validation can come in many forms, such as user feedback, press attention or, if your product is a Website, traffic.  When we first launched Cost2Drive.com back on October, 2008 AAA’s Fuel Cost Calculator was the product we had our sights on.  So far we’ve received a great deal of validation from our users and the press that we built a superior product.

Today  we’re very excited to report that we’ve achieved our third point of validation as for the first time since launching Cost2Drive traffic to the site has surpassed AAA’s Fuel Cost Calculator.  As gas prices have soared in the past few months Cost2Drive is taking a disproportionate share of the market with Unique Visitors up 184% in December over November and up a stunning 271% from December 2009!  Meanwhile according to Compete.com, a site that reports Website visitation numbers,  traffic to AAA’s Fuel Cost Calculator plummeted as Unique Visitors were down 58% compared to November and down 55% from the prior year.

Based on internal traffic data it appears this trend is continuing in January as recession-battered consumers try to better plan and budget for rising gas prices, and according to a recent US Energy Information Administration report there doesn’t appear to be much relief in sight as gas prices could surpass $4 by this summer.    That’s why we continue to innovate by providing new tools like the Facebook application we launched last month that calculates how much money you’d save driving an electric car to work.

We still believe there is tremendous opportunity for further innovation in this space so look for more exciting news from us in coming months!

Why are gas prices so high? 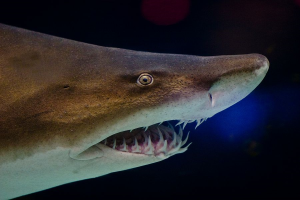 It’s like that horror movie we’ve all seen, where we’re certain that the monster has been slayed, but just when we think its safe to go back in the water again….

Over the Christmas holiday you may have noticed the signs. No, not the tell-tale signs, the actual retail signs at the service station heralding a new era of gas prices above $3, and if you’ve been reading the press lately the predictions are that its going to get worse, possibly much worse.

Around Thanksgiving AAA set things in motion by predicting gas prices of $3.50 by this spring.  This was enough to get the journalist circling as they could smell blood in the water.   Soon after Thanksgiving analysts further baited them with predictions even higher, up to $4 a gallon.  Without skipping a beat, many of them bit.

And then, right on the heels of Christmas, the ultimate chum was thrown in the water, $5 gallon by 2012!  Let the feeding frenzy begin!  There’s no telling where the actual price will end up, but one things for sure…we’re gonna need a bigger boat (or at least a more fuel-efficient one).

What do you think of these rising gas prices? Share your comments below.

What does it cost to drive a Chevy Volt?

For our inaugural post on the Cost2Go blog I thought it might be fun to look into the future by adding the Chevrolet Volt into our Galculator (fuel cost calculator) on Cost2Drive.  The timing of this coincides with two conferences in Texas this week; TravelCom 2010 in Dallas and the SXSW music/film/technology conference in Austin where Chevrolet is a sponsor, and will be hosting a Chevy Volt Recharge lounge at the event.

So what would it cost to drive a Chevy Volt if we had one in our hands today?  Well, first we need to understand the fuel economy of the vehicle.  We looked to a CNN/Money article from last summer to learn that the Volt is expected to get 230 mpg for commuting-type driving and 62.5 mpg for longer distance highway driving where the route extends the 300 mile range of the vehicle (based on a 6 gallon fuel tank).

Just for kicks we entered the route from Lansing, MI to Austin, TX (location of the SXSW conference) driving a Chevrolet Volt and the  cost is $59 each way based on current fuel prices along the route.  The cheapest airfare for that route is $277 (roundtrip on Delta) so in this case its definitely cheaper to drive…if you don’t mind spending 2 days on the road.

Check it out here and select the 2011 Chevrolet Volt and let us know what you think!

(Note that our Galculator does not yet include the cost of electricity so that cost, though likely nominal, is not factored into the cost calculations)