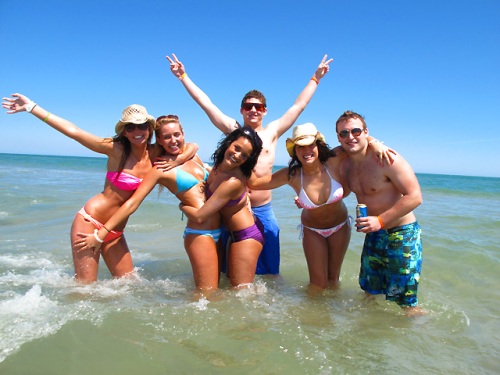 Photo reprinted with permission from spadre.com.

Spring break is upon us.  How do we know this? Here are the top 10 signs!

10. Your teacher just assigned you a huge project.

9. South Padre Island is at the top of the ride share board.

7. You’re shopping for bikinis and its 10 below zero outside.

6. Your boyfriend just broke up with you.

5. You just broke up with your boyfriend.

4. A strange orange tan has mysteriously appeared on your body.

3. The gym is suddenly packed.

1. You just blocked your parents from your Facebook page.

Who Are the Biggest Losers in College Football’s Conference Realignments?

This week’s sports news was filled with stories of major college football conferences jockeying for new teams while panic set in for conferences like the Big East that have been shedding teams faster than defectors fleeing the Soviet Union when the Berlin Wall fell.  TCU bolted on the Big East without playing a single game and were quickly followed by long-time members Syracuse, Pittsburgh and then last week West Virginia.

Apparently geography was not a factor in the mad dash to join new conferences  as some teams ended up looking like remote outposts of their new conference brethren. 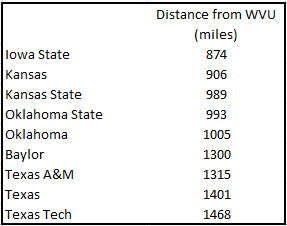 WVU is a good example as it ended up joining the Big 12 Conference which consists largely of teams from the Southwest region whose nearest team, Iowa State, is a distant 874 miles away from the WVU campus in Morgantown, WV.

Compare that with WVU’s nearest Big East foe Pittsburgh who is a short 80 miles up highway 79 and you’ll quickly see who’s going to suffer most by these realignments.   We took a look at what Mountaineer fans will be paying in travel costs to get to the nearest possible road game in the Big 12 conference versus the Big East using our new Cost2Drive iPhone app.

WVU to Nearest Away Game - Big East vs Big 12

Assuming you’re driving a sedan (in the above example a 2004 Inifiti G35) you can see that fans driving to away games will be forced to shell out 12 times as much for fuel to get the nearest away game for the Big 12 Conference at Iowa State compared to the annual Big East backyard brawl with Pitt.  If they choose to fly, the cheapest round trip flight is $354 which isn’t an option (or a necessity) for the Pitt game.

If you apply the $110 difference in gas costs and double it for a round trip Mountaineer fans will be paying an additional $220  to drive to the nearest road game when it joins the Big 12 Conference.  Apply this to 10,000 fans and you’re talking $2,200,000 per game from consumers in a period when high gas prices are already taking a big chunk of their wallets.  Assuming at least 5 away games each year and it amounts to over $10 million per team, and that’s not even  factoring in the environmental impact from the additional carbon footprint this will generate.

Perhaps all these conference realignments will end up creating a windfall for the travel industry, but I fear the expense may prove too much for the cash-strapped students who tend to be the most ardent college football fans.

Students Use Cost2Drive for Trips Back to School

Hundreds of Colleges and Universities Entered as Destinations

When we launched Cost2Drive we thought that college students might find it a helpful tool for budgeting trips to-and-from college campuses, as well as a way to save money on road trips like those legendary jaunts to spring break destinations.

Boy were we right!  As fall draws near and gas prices remain stubbornly high we took a look to see if users were searching for colleges on Cost2Drive.  We were amazed to learn that students are entering hundreds of institutions of higher learning as destinations on Cost2Drive to help them better plan  their trips back to college.

So what types of schools are students searching for?  It turns out a very broad spectrum of colleges and universities including some of the best known Ivy Leagues schools such as Yale and Harvard (its good to know they need help with math too) as well as lesser known community colleges like Sinclair Community College in Dayton, OH and Nassau Community College out on Long Island, NY.

Below is an interactive maps representing some of the institutions that people have been searching for on Cost2Drive.  Do you see your college on the map?

We’re also including a list of the top 20 colleges and universities based on the number of user searches on Cost2Drive in July along with the current cost to drive to them from nearby metropolitan markets.  If your school is on the list you can click on the link and it will take you to a results page where you can customize the route to learn what it will cost you to drive back to your college.  When you land on the page simply click on the ‘edit trip’ link and add in your home location and vehicle information.

If your school is not on the list you can visit  Cost2Drive.com and find your school using the new autocomplete feature we recently implemented.  Cost2Drive will not only provide the estimated cost of the trip based on current gas prices, but it will also locate the cheapest gas at refueling points along your route.  For trips over 200 miles Cost2Drive will also show you the cheapest airfare so you can see if its cheaper to fly or drive back to school.

If you’d like to have this functionality added to your school website we have a trip planning widget available for free and we’d be happy to help schools add it to their websites to help current and future students plan trips to the university.

To all returning college students: Happy Driving and have a great school year!