Think Gas Prices Are High This Holiday Season? Wait ‘Till You Hit the Toll Booth 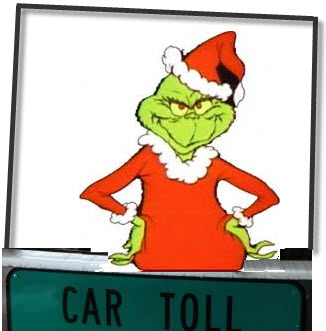 As if record high gas prices aren’t enough for travelers to deal with this holiday season drivers must also brace for additional costs related to increased toll fees across much of the nation, especially along the eastern seaboard.

If you’re planning a trip to New York City for a shopping or theater excursion this holiday be aware that back in September the toll rates on the bridges and tunnels increased by 50% so entering the city by car now costs a whopping $12 if you’re paying in cash (EZ Pass prices are $9.50 Peak, $7.50 Off-Peak).  There’s something a little scary about tolls that require you to pull a ten-spot out of your wallet for a single crossing, and the Verazzano-Narrows bridge even tops this with a $13 fee. Click on the interactive map below to see the new toll rates at each crossing.

On the first of November a number of toll hikes went into effect in Maryland as well including the toll for the Bay Bridge connecting Maryland’s Eastern Shore with its mainland which increased 60% from $2.50 to $4.  Tolls on all three Baltimore Harbor crossings (the Fort McHenry Tunnel, the Baltimore Harbor Tunnel and the Francis Scott Key Bridge)  increased 50% from $2 to $3, and the toll on the Harry W. Nice Memorial Bridge increased 33% from $3 to $4.  In northern Maryland smaller toll hikes of 20% went into effect as the tolls on the the JFK Memorial Highway (I-95) and the Thomas J. Hatem Memorial Bridge were raised from $5 to $6.

Maryland has also introduced a brand new toll road, the much-anticipated (and hotly-debated) InterCounty Connector (ICC) that connects I-95 with I-370.  This new toll road has been free up until December 5th when a $6 toll went into effect ($4.50 EZ Pass) for driving the entire 18-mile stretch of the road during peak hours on weekdays, or $4.80 ($3.20 EZ Pass) for off-peak hours and  weekends and federal holidays.  Night owls can save extra money on the ICC as the toll rate drops to $2.60 ($1.90 EZ Pass) from 11 pm to 5 am every day of the week.

Things won’t get any better in 2012, as numerous tolling authorities are set to roll out increases on the first day of the new year with the Illinois Tollway leading the pack with an 87% toll hike on four toll roads (the Jane Adams Memorial Tollway, the Tri-State Tollway, the Reagan Memorial Tollway and the Veterans Memorial Tollway).  They have an excellent interactive map of all the toll facilities that you can view here.  New Jersey will also be introducing toll hikes of 53% and 50% on the Garden State Parkway and New Jersey Turnpike respectively on New Years Day.  At the end of January 50% toll hikes will also go into effect for Hudson river crossings between Bear Mountain and Catskills, NY when tolls will climb to $1.50 ($1.25 EZ Pass) from the current $1 rate.

Many other states have proposals underway to introduce tolls in 2012 and beyond including Missouri where the Dept. of Transportation is considering adding tolls to I-70, the main highway that cuts across the state from east to west, as a way to fund a major rebuilding effort.  A similar proposal is underway for interstates I-80 and  I-35 in Iowa and tolling actions are planned in  Florida and Colorado as well.

So what’s causing this sudden increase in tolls? Woefully underfunded state departments of transportation that are increasingly turning to tolls as a way to rebuild infrastructure without raising taxes.  From a consumers perspective its not just the additional cost that’s at issue but the increasing complexity of the fees that make it nearly impossible to predict what it will cost to drive places.

We’re going to be writing a separate post about these new variable tolling structures, but meanwhile we’re working aggressively on finding ways to include toll information into the trip cost estimates we provide on our Cost2Drive website and Cost2Drive iPhone App as its the number one request we hear from our users.  Until then we’ve put up a site called Cost of Tolls that aggregates toll information from across the US to help drivers quickly get the latest toll information prior to leaving on a trip.

One response to “Think Gas Prices Are High This Holiday Season? Wait ‘Till You Hit the Toll Booth”